The first objective was to separate a glycine, aspartic acid and lysine mixture using an ion-exchange chromatography. The pH of the sixteen fractions resulting from the separation was obtained. These pH values along with the elution volume helped illustrate how through a gradient of increasing pH, the amino acid were eluted based on their isoelectric point. A Ninhydrin test followed by the heating of the amino acid samples was also performed to assess the concentration of the amino acid by spectrophotometry. The second objective was to find the molecular weight of an unknown protein using sodium dodecyl sulfate polyacrylamide gel electrophoresis (SDS-PAGE). As the unknown protein separated by electrophoresis, the molecular weight markers traced the migration of the protein along the gel. The end result of that made it possible to model the linear relationship between the logarithm of the protein molecular weight and its migration distance. By interpolation, the molecular weight of the unknown protein was then found.

This lab looked at the enzymatic action of acid phosphatase in catalyzing the hydrolysis of phosphoric acid monoesters bond. The phosphoric acid bond of interest in this case was that of a substrate known as p-nitrophenylphosphate (PNPP). Once hydrolyzed by acid phosphatase, PNPP was converted to p-nitrophenol (PNP) product and an inorganic bisulfate anion. This lab came with three experiments. In the first experiment, the purpose was to determine the desired concentration of acid phosphatase that would keep the rate of hydrolysis constant for a ten minutes period. In the second experiment, the purpose was to use a lineweaver burk plot to find two kinetic parameters, Km and Vmax. Lastly, in the third experiment, an inhibitor was added to the hydrolysis reaction and the purpose was to determine the identity of the inhibitor. This was achieved by comparing the Km and Vmax values for the inhibited reaction to that of a control sample. The number of the inhibitor was 22 and the backup data were used.

The purpose of the first experiment in this lab was to prepare two membrane fractions, an endoplasmic enriched fraction (microsomal fraction) and a mitochondrial enriched, starting from a rat liver tissue. Homogenization of the tissue, differential centrifugation and filtration made it possible to obtain the two type of membrane fraction. In the second experiment, a microsomal lipid sample was separated by 2D thin layer chromatography (TLC). The first dimension was developed with a basic eluent while an acidic eluent was used for the second dimension. Three standards (each containing two different lipids) as well as the sample were spotted on the TLC plate. Lastly, the lipid to protein ratio in the mitochondrial fraction were analyzed. Brilliant Blue Dye R was used for the lipid assay. Analysis of the lipid and protein assay made it possible to determine the concentration of lipids and proteins as well as the yield of the mitochondria preparation. 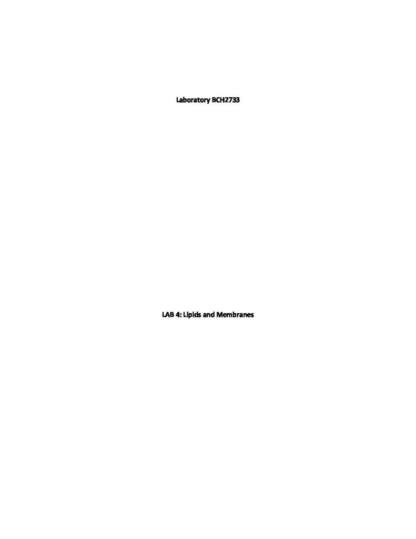