In order to design the packed tower, parameters such as the temperature, pressure, solvent flowrate, type of packing, size of packing and column diameter are required to be analyzed in depth to determine the final design. The height of the column will be the main design parameter that will determine the optimal values for the parameters previously mentioned. With the use of a simulator, heuristics and various case studies the impact of parameters on the height of column was analyzed. Therefore, from the performed analysis an optimal design was found.

The purpose of the study herein is to provide an adequate separation process for the mixture of 2:3 molar ratio acetic acid and water as a binary system having an average feed flow rate of 1000 mol/h. An initial design considered based on a literature review consisted of a hybrid process including a 3-stage counter current liquid-liquid extraction followed by a distillation of raffinate and extract in two separate columns.

Though after considering high azeotropic acetic acid and water content that would result from that, as well as complexity of design, peripheral equipment required and much increased cost considerations, this design was replaced by a simpler one. A double effect distillation with complete heat integration to reduce heat requirement was the chosen unit operation to achieve this objective. The project aim was to maximize the purity of the outlet species while minimizing both capital and operating cost.

As such, two different double effect distillation systems were considered, one that was more cost effective but did not score as high on purity (equimolar 0.85 mol% recovery of both species) and another one that compromised on cost (with additional equipment) but maximizing purity (99.99 mol% acetic acid). In the design of this acetic dehydration process, the economic viability of both systems was assessed. The system that maximized purity was recommended, considering its separation efficiency, feasibility and return on investment. Although not as profitable as the cost-effective design, the process that maximized purity was found to be feasible and therefore recommended for the separation. The height, diameter and number of trays for that process 23 m, 0.72 m and 37 for the first distillation tower and 24 m, 0.79 m and 39 for the second distillation tower.

Additionally, peripheral equipment supporting the double effect distillation column were designed, namely a shell and tube heat exchanger involved in the complete heat integration having an overall heat transfer coefficient of 119.6 W/m2.K and an area of 6.7 m2 as well as two centrifugal pumps, both with efficiency of 75%. The power supply was 0.32 W for one of the pumps and 0.40 W for the other.

Separation is a powerful technique used in chemical engineering. It was first introduced in chemical industry in the late 19th century but was practiced earlier on a smaller scale in chemistry laboratory [1]. Separation is understood as a technique in which a species mixture is separated by taking advantage of the system or species properties [2]. The system can be a multiple phase system in which case the desire species can be separated by taking advantage of the phases. This results in a phase that is enriched of the species of interest and one that is depleted of it. The system can also consist of a single phase in which case the properties of the desired species (e.g. solubility, volatility, diffusivity) solely interplays in its isolation.

Absorption is a gas-liquid separation process whereby a solute is absorbed from the gas into the liquid. The reverse of such process is known as stripping or desorption. The properties of the species that is exploited in absorption is solubility of the solute that can diffuse from the gas into the liquid phase. Absorption columns are the unit operations used in absorption. Their design requires knowledge on the equilibrium data of the solute in the gas and liquid state and the operating inlet and outlet conditions in the gas and liquid streams. From the equilibrium data, the size and number of equilibrium stages can be determined and from the operating conditions, the mass and energy balances can be performed to determine the number of equilibrium stages. Mass transfer coefficient also intervenes when determining the size of equilibrium stage. 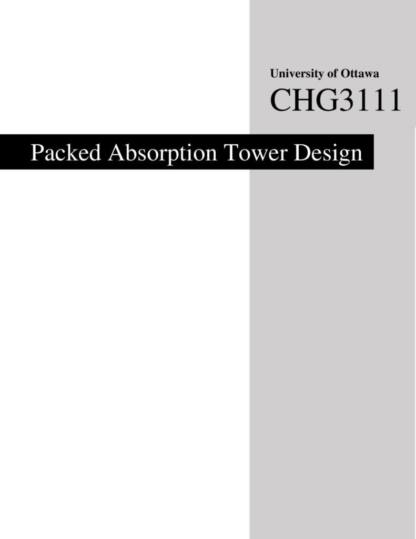