This report proposes an optimized chemical process for the production of Methyl tert-Butyl Ether (MTBE) from butene and methanol. The objective of this project was to produce 20000 MT/year of MTBE while minimizing the (capital and operating) costs and energy balance for separation. The butene inlet stream (25°C, 4 bar) that reacted with the pure methanol stream (25°C, 4 bar) to make MTBE were simplified to 1-butene (77 wt%) and isobutene/i-butene (23 wt%) of which solely i-butene reacted with methanol to produce MTBE in a 3.125 methanol to i-butene molar ratio. 1-butene was treated as an inert. The single-pass conversion of isobutene (i-butene) in the reactor containing ion exchange resin catalyst was specified as 96% with condition of 90°C and 30 bars. Two distillation were followed in order to extract 94 mol % pure MTBE. Meanwhile, the unreacted 1-butene was transferred to an upstream plant process while unreacted methanol and i-butene were recycled. Water at 25°C and 1 atm was supplied to the process for cooling, separation efficacy and strategic heat integration to finally be sent to a water treatment plant (99% water purity requirement). The pressure drop across all coolers, heaters and the reactor was specified as 10 kPa and no competing reaction(s) had to be accounted for in this project. All in all, the four-step overall design approach consisted of: (1) prepping the feed stream to the conditions required at the reactor inlet stream; (2) separating different chemical compounds involved in th process through an absorber and two distillation column to isolate 94 mol % MTBE; (3) recycling the unreacted reactants (methanol); (4) transferring the remaining substances to their proper chemical plant for further processing, 1-butene to the upstream processing plant and water to a water treatment plant (99% purity). All the requirements were met for the proposed design which had a positive return of investment of -4986.486289 $, thereby making this designed MTBE process not profitable.

Considering the specifications outlined above, the plant was designed by constructing an overall block flow diagram (BFD), a detailed BFD, a process flow diagram (PFD) and finally a piping and instrumentation diagram (P&ID) of one of the units to plan out the process. The process was then created in UniSim to perform a more in depth analysis. The system is comprised of a feed prep section, a reaction and a separation section. The hydrogen and phenol feeds are prepared using a valve and pump respectively, then they are mixed using a mixer and the mixed stream is fed to a heater. The reaction section consists of a catalytic reactor surrounded by a jacket to prevent a runaway reaction due to the exothermic nature of the reaction. In the reactor, cyclohexanone and ,consequently, cyclohexanol are formed as well as some hydrogen since the reactions do not have a 100% conversion rate. The separation sections consist of a cooler and a flash column where hydrogen is removed and compressed to the desired pressure before being recycled. This is followed by a train of three distillation columns to separate and purify cyclohexanone and cyclohexanol. The two product streams were brought to ambient conditions using coolers and valves and then exit the system.

The production of mono-ethylene glycol (MEG) is extensively studied in chemical industry as it lends itself to a wide array of applications. For this reason, it is necessary to optimize the design of such chemical plant and assess its viability. The purpose for this project was to simulate a catalytic thermal hydration of ethylene oxide (EO) to produce mono-ethylene glycol. The challenge faced in simulating this process was obtaining a 5000 kg/hr production rate of MEO with a 99 wt% purity while maintaining a 90% selectivity toward MEG and a H2O/EO ratio of 22. This was addressed by prepping (1) the feed stream (H2O and EO) to the reactor favorable operating conditions, (2) separating the desired (MEG) product from its byproduct (DEG) using a two-stage distillation system, (3) recycling water to the reactor during the separation, and (4) bringing the product stream to atmospheric conditions. The project was simplified in that the only side-product oligomer considered in the reaction was di-ethylene glycol. The next step in the project would be to simulate a nearly pure and selective MEG production plant while accounting for other oligomer byproducts.

An oxycombustion reaction between natural gas and high purity oxygen offers an advantage by remove the nitrogen components from the flue gas exiting the reactor. The flue gas consisting mostly of CO2 and water, is then be compressed and safely disposed by applying a carbon capture and storage technology.

To successfully achieve the oxycombustion reaction, natural gas must be processed and dehydrated prior to entering the combustion burner. In order to dehydrate the natural gas to a water amount below 300 ppmw, an absorption tower flowing liquid TEG was installed. The contact surface area between the natural gas and TEG was increased by installing 4 trays along the vertical length of the tower. The exiting gas contained a mass fraction of 255 ppm.

Throughout the Air Separation Unit, ambient air was purified in order to achieve a 99% wt stream of Oxygen. A component splitter was used to simulate the process; however, a cryogenic distillation tower must be installed in order to separate the nitrogen and oxygen due to their difference in volatilities.

The oxycombustion unit contains the adiabatic burner carrying the reaction between natural gas and pure oxygen. By implementing a recycle loop for the flue gas exiting the recycle stream, the temperature maintained through the reactor is 1852℃. While the flue gas exiting the reactor is at very high temperatures, it is additionally used to produce steam for a steam power plant. The remaining flue gas consisting of mostly CO2 and water is then sent to the multi-compression train unit.

The multi-train compression unit will condense the water molecules from the flue gas by compressing and cooling the gas. An additional two-phase separator will be installed to remove the condensed water molecules from the gas stream prior to entering the compressors. The final composition of the stream exiting the unit will be 96.18 % wt CO2, while its temperature and pressure are 120 Bar and 20℃. 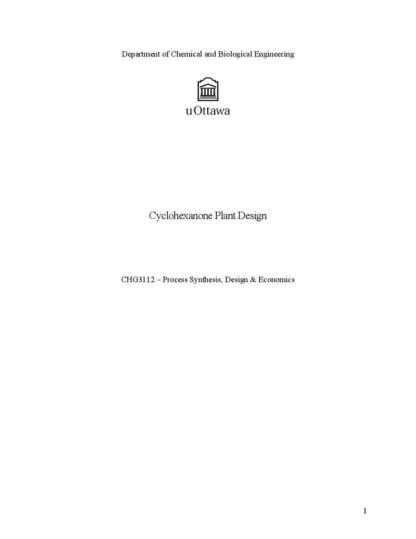