In this experiment, ion exchange chromatography was performed in order to separate a mixture of glycine, lysine, and aspartic acid. This was achieved by taking advantage of the amino acids’ molecular structures and ionic characters. Separation of these amino acids was accomplished by using a gradient of increasing pH that then was eluted in the order of their isoelectric point. A colorimetric assay was then used to test for the presence of the amino acids using Ninhydrin. As well, during this lab an unknown protein was analyzed by using its molecular weight with a technique known as SDS polyacrylamide gel electrophoresis (SDS-PAGE). The unknown protein was then compared with molecular weight markers and the weight of the unknown protein was calculated using a line of regression equation.

Two membrane fractions were prepared from a rat liver tissue: a microsomal enriched fraction and a mitochondrial enriched fraction. The lipids were extracted from the microsomal fraction, separated using 2D thin layer chromatography and were then compared with lipids extracted from the entire tissue. The 2D TLC plate is composed of mildly polar silica gel, which will bind polar compounds more tightly than non-polar ones. The first dimension of the plate was developed in a basic solvent and the second dimension was done in a basic solvent. The purpose of these 2 dimensions was to be able visualize the various polarities of the lipids and how they react on the silica gel in varying pH environments. In the second part of the experiment, the lipid/protein ratio in the mitochondrial fraction was analysed. Brilliant Blue Dye R was used to estimate the lipid concentration of the fraction and an absorbance assay was used to estimate the protein concentration.

This lab aimed to display some of the fundamental molecular principles involved in double stranded DNA and to quantify and characterize the DNA using UV spectrophotometry at different wavelengths and by using a melting curve. The purity and the effects of low and high salt on the DNA were also investigated. A plasmid map was constructed to map the relative position of the HindIII and EcoRI restriction enzyme cut sites on a plasmid following digestion of the plasmid with these two enzymes. This map was made by analysing the migration distances of the resulting fragments by agarose gel electrophoresis 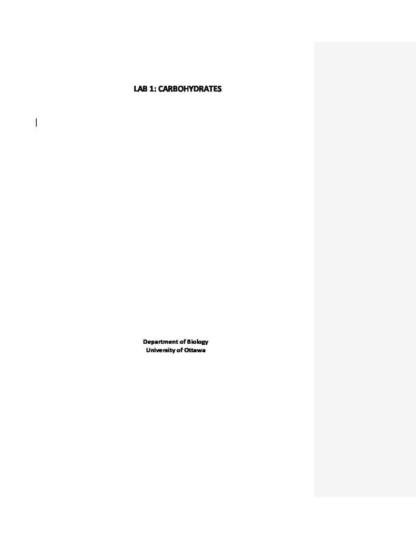