The effect of reactant flowrate, hydrogen concentration, and flow configuration on the performance of a polymer electrolyte membrane fuel cell under Chemical Engineering Laboratory (CHG 4116).

produce electricity from the oxidation of hydrogen (H2) gas, and are becoming increasingly

studied as an alternative energy source for many industrial and consumer applications. In this

study, the effects of total reactant flowrate, H2 concentration, and flow configuration on the

performance of a 25 cm2 NafionTM membrane-equipped PEMFC were investigated. Cell

performance was evaluated on the basis of polarization curves, power density curves, and

concentrations between 100 and 50 mol%, and either serpentine or open flow configurations at

the cathode. Potential losses due to activation polarization decreased with increasing total feed

flowrate in the serpentine configuration, likely due to improved reactant saturation at the

electrodes. Increasing the total reactant flow caused an increase in power density but no

appreciable change in overall energy efficiency, which was consistently between 0.625 and

0.645. Cell performance did not change significantly when the H2 flowrate and concentration

alone were varied in the presence of excess oxygen (O2), but increased when both the H2 and air

flowrates were increased. This behaviour suggests that at the low/moderate temperatures and low

on the cathode-side conditions. Overall energy efficiency was consistently greater with the

statistically significant margin. The results of this study provide insight into the complex

interactions between operating conditions and polarization effects during PEMFC operation 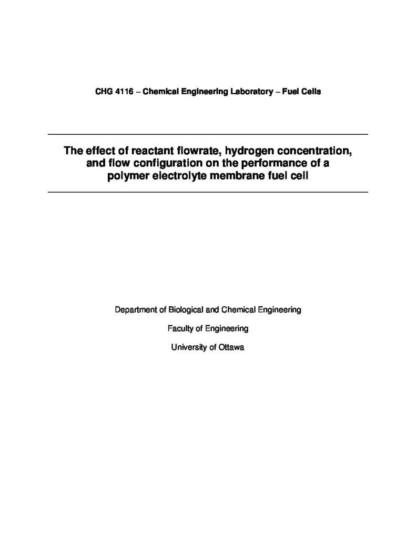 Falling Film Evaporation under Chemical Engineering Laboratory (CHG 4116) from the University of Ottawa. These 71 pages long lab report was updated in 2022.

Absorption of Carbon dioxide from Air under Chemical Engineering Laboratory (CHG 4116) from the University of Ottawa. These 84 pages long lab report was updated in 2022.

Membrane Separation Report under Chemical Engineering Laboratory (CHG 4116) from the University of Ottawa. These 37 pages long lab report was updated in 2022.

Falling Film Handout Experiment under Chemical Engineering Laboratory (CHG 4116) from the University of Ottawa. These 4 pages long lab report was updated in 2022.

Fluidization and Three Phase Holdup under Chemical Engineering Laboratory (CHG 4116) from the University of Ottawa. These 53 pages long lab report was updated in 2022.