Sports Law essays under LAWS50119 at the University of Melbourne. 2021 written, 20 page notes contain 3 essays for given topics with full references.

This file contain essays for 3 topics with full references. They were written for the following topics under different questions.

Topic 1: Advice on the Legality and Efficacy of a “No-fault Stand Down Policy”

A national sports body in Australia is thinking of introducing a “no fault stand down policy” for its elite professional league. Their view is that once one of their elite players is charged with a serious criminal offence, the continued participation of such a player would likely damage the image, interests and welfare of the professional game. Accordingly, they would like the rule to mandate that a player facing serious criminal charges should be stood down from playing until all criminal proceedings are concluded. Before drafting the rule, they seek your advice on the legality and efficacy of such a regulation.

Does the decision emanating from CAS A1/2020 Shayna Jack v Swimming Australia & Australian Sports Anti‐Doping give athletes more scope to reduce a ban for unintentional doping even if they cannot prove how the contamination occurred?

Topic 3: Life Bans for Match-fixing: Only One Part of a Bigger Picture

In April 2021, the International Tennis Integrity Agency banned Argentinian player Franco Feitt for life after he admitted to nine incidents of match fixing between 2014 and 2018. Are life bans from sport a necessary and proportionate means of deterring match‐fixing in sport? 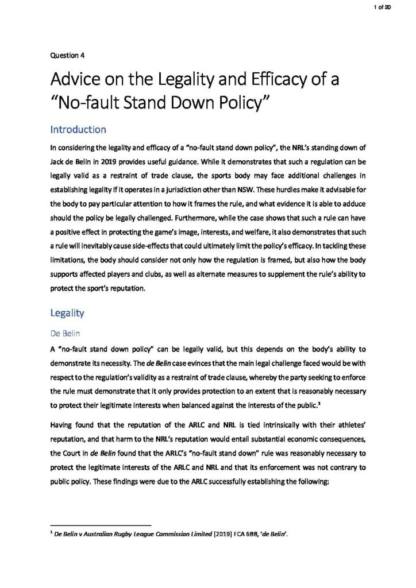